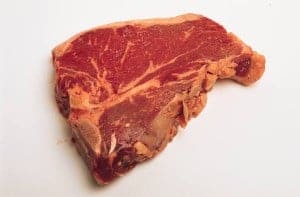 Red meat is back in the news , and once again it’s being singled out as being uniquely bad for you.  Here’s the sound bite: Eating red meat increases stroke risk while eating poultry reduces it.   But, there’s a little bit more to the story. (There usually is.)

First of all, the 28% increase in stroke risk applied to people eating more than half a pound of red meat a day.  That’s two or three servings of red meat every single day–or twice the average amount of red meat consumed by Americans.   Surely that should be part of the story.

But here’s what really makes me crazy. Researchers admitted that they were surprised that eating more fish didn’t seem to reduce stroke risk–but were quick to point out: “There’s a lot of variation in how people cook and prepare fish, and we couldn’t get down to that level.”

Wait a minute.  What about the variation in how people cook and prepare red meat? When the results don’t line up with our preconceived notions (fish: good), we cite unaccounted-for variables.  But when the data show what we expected them to (red meat: bad), the same variables don’t seem to play a role?

Does anyone else detect a white hat bias?

9 thoughts on “Red Meat and Stroke Risk: Beyond the Headlines”