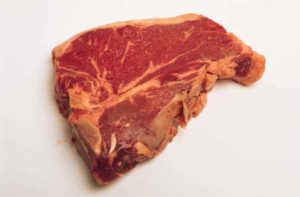 I’m sure you saw the headlines this week about a new report from the American Institute for Cancer Research and the World Cancer Research Fund.  The report covered a variety of factors that appear to increase risk of colorectal cancer, including alcohol, processed meat, and excess belly fat, as well as things that appear to decrease the risk, including exercise, garlic, milk (but not cheese), calcium, and foods containing fiber.  However, most of the headlines I saw were along the lines of “It’s Official: Red Meat Causes Cancer.”

As long-time followers know, I’ve long been suspicious of the science on “red”  vs. “white” meat.   See, for example: Red Meat: Not so Bad After All?

Having now read the latest report in its entirety,  I want to highlight a few nuances that may help you decide how–or whether–to change your eating habits based on this latest indictment of red meat.

How Much Red Meat Do You Eat?

As usual, the dose makes the poison.  The people who experienced the most dramatic increase in risk were those eating a half a pound of red meat every day.  People who eat less than a pound of red meat a week are at little to no increased risk.   Researchers have a theory about why this is the case.

Red meat contains the heme-form of iron.  Poultry and fish also contain heme iron; the iron in vegetables is a non-heme form.  Iron is an essential nutrient, of course, and the heme form of iron is the most bioavailable form of the mineral.  But  too much heme iron in the gut can promote the formation of potentially carcinogenic compounds.  The fact that red meat is a richer source of iron than white meat could explain why consumption of red meat in large quantities is associated with increased colon cancer risk, while eating  poultry, fish, or moderate quantities of red meat is not.

Do You Eat Vegetables?

The formation of those potentially carcinogenic compounds is largely blocked by the consumption of antioxidant rich fruits and vegetables, by the way.   And, indeed, higher consumption of these foods decreases risk of colon cancer.

In other words, ounces per day of red meat doesn’t tell the whole story.

How Do You Cook Your Meat?

The other (and in my mind, stronger) theory about why red meat is linked to colon cancer has to do with the formation of heterocyclic amines (HCAs)  and polycyclic aromatic hydrcarbons (PAHs) that form when red meat is cooked over direct flames or high heat, such as a char-broiled steak.   However, simply marinating that steak for 30 minutes before throwing it on the grill can reduce the formation of harmful compounds by up to 90%.  For more ways to reduce the formation of HCAs and PAHs, see:  Tips for Healthier Cookouts

So, how will this latest report (or anything I’ve said here) impact your food choices?

46 thoughts on “Red Meat and Colon Cancer: Beyond the Headlines”