This lives right on the kitchen counter because I use it almost every day. I have a Vitamix which is no small investment, but this workhorse has served me well for years. I’m actually on my second Vitamix. After 15 years, I decided to retire my original, and Vitamix has a trade-in program that gave me a discount on my new purchase. There are less expensive options, such as the NutriBullet Blender–and the Vitamix is more power than you’d need for smoothies. However, its heavy duty parts and high powered motor can also turn whole wheat into flour, nuts into nut butter, and other tasks that might cause a lesser motor to wheeze.

I hesitated before jumping on this particular bandwagon because I’d never used a pressure cooker before and didn’t particularly miss it. Turns out that was just because I didn’t know what I was missing. Instant Pot fans tend to be a bit cult-like, but I’ve totally drunk the Koolaid. I use it to hard-boil eggs (perfect every time!), make stock in 30 minutes instead of two hours, cook hard beans and steel cut oats to tender (but not mushy) perfection in 15 minutes, and countless soups, stews, and one-pot meals. There are many sites, cookbooks, and Instagram feeds dedicated to Instant Pot recipes, so inspiration and instruction is never more than a click away. Easily the best kitchen purchase I’ve made in ten years.

Listen to my podcast episode: 4 Reasons You Need a Pressure Cooker. 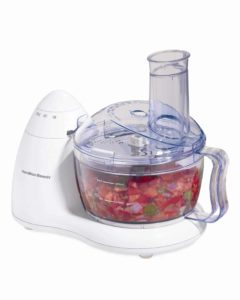 My old Cuisinart (inherited, actually) finally gave up the ghost, and I replaced it with a much less expensive Hamilton Beach model. I rarely use it to slice, chop, or grate. It’s too much trouble to set up (and clean) and usually quicker just to process ingredients with a kitchen knife or box grater. I do like it for making bread dough and pie crust–but these are two items that I don’t make very frequently.  The thing that justifies its place in the kitchen and not in the basement is that I’m hooked on banana “ice cream.” I throw frozen banana chunks and a spoon of unsweetened cocoa powder into the bowl and hold down the button until it’s processed into a soft-serve consistency. (Here’s a quick video showing how.) This no-sugar-added dessert keeps me out of so much trouble, I don’t know how I survived before I discovered it.

I jumped on the Soda Stream bandwagon so long ago, it was still called the Soda Club and replacement CO2 cartridges were dropped off and picked up on the front porch like old-timey milk bottles.  I love drinking sparkling water (plain or with a splash of citrus or bitters) and before I bought this carbonator, I was hauling a case or two home from the grocery store every week (and then hauling the empties to recycling center).  Now, I have a bottomless well of fizzy water, no bottles to haul or recycle, and two eco-friendly reusable steel cartridges in constant rotation.  Could not, would not want to live without this one. (I put some myths to rest about carbonated water in this episode of the Nutrition Diva Podcast.)

After succumbing to Instant Pot mania (and then becoming a true believer), I also finally gave in to curiosity about the Air Fryer. But with very different results. In my initial enthusiasm, I tried toasting nuts, tortilla chips, French fries, egg rolls, and chicken wings…with mostly satisfying results. It’s really fast and clean up is easy. You get a nicely browned and crisp exterior with almost no oil. And yet this appliance still ended up relegated to the basement. The foods it’s good for tend to be more occasional treats in my household and not daily staples.

Don’t get me wrong: I LOVE my Kitchen Aid mixer and have also acquired a variety of attachments (mostly as gifts) such as the ice cream maker, pasta roller, etc. Like the Vitamix, these mixers (and their accessories) are expensive, but they are also super high-quality and long-lasting. The reason it hasn’t earned a spot in my kitchen is that the things I make with it are treats (cookies, cakes, pasta, ice cream) and therefore not produced that often. It’s also super heavy. Lugging it up and down the basement stairs helps me burn off a few of those treat calories.

Slow cookers can’t be beat for healthy and hands-off  make-ahead meals. (Also for keeping the mulled wine warm at holiday parties.) I use mine a lot in the summer because a) there’s plenty of produce around to create an easy plant-based meal like this one, and b) they don’t heat up the kitchen. (Here are 4 more reasons to dig your slow cooker out of storage.)  But one of the hidden talents of my Instant Pot is that it also functions as a slow cooker.  So now, my original slow cooker only makes it up the basement steps on those rare occasions when one needs two at the same time.  (Such as the party where we are serving both mulled wine AND spiced cider.)

Which appliances are in constant use in your kitchen? Which ones gather dust?