About ten years ago, I cut way back on the amount of meat I was eating, from 3-4 times a week to 3-4 times a month. I wasn’t worried about my health. And I enjoy a good steak or roasted chicken as much as anyone. I stopped eating meat mostly because I felt guilty about it.

I had concerns about the treatment of the animals I was eating, the environmental impact of large scale livestock operations, the sustainability of it all. I tried to research which farms and brands were raising their animals humanely and responsibly but it ended up being easier just to order (or cook) vegetarian meals instead.

Recently, a company called Butcher Box contacted me to see if I would review their subscription meat delivery service. Initially, I declined. But then, I learned that all of the beef, pork, and poultry they sell is from farmers who raise their animals humanely, naturally, and responsibly. This is meat I can eat without feeling guilty–because Butcher Box has done the due diligence for me.

The importance of supporting sustainable agriculture

If you know any farmers and ranchers, you know it’s a hard way to make a living. Taking the high road (raising their animals on natural pasture instead of crowded feedlots, avoiding antibiotics and hormones, and so on) is both expensive and risky. Many who would like to transition into sustainable practices simply can’t afford to.

By linking these small farmers with consumers like me (and maybe you), Butcher Box is making it possible for more farmers to raise their animals in a way that is better for the animals and the planet. We can do our part by seeking out responsibly-produced animal products–as well as being mindful of how much we consume. 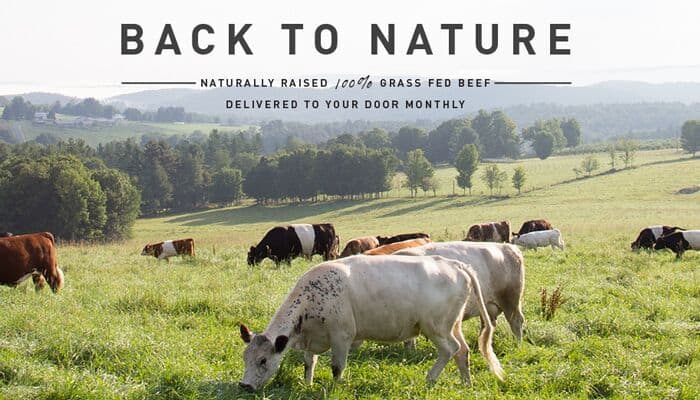 Each Butcher Box contains a selection of grass-fed beef, free range chicken, and heritage pork–about 10 pounds of meat in a variety of cuts. You can have a box delivered every month or less frequently. For a household of two eating meat once a week, a box every three months is perfect. The entire box costs $129 and shipping within the contiguous U.S. is free. There’s no minimum subscription length; you can cancel at any time.

I love that the meat is frozen immediately after being butchered and remains frozen until I’m ready to cook it. No wondering how often that “fresh” meat at the grocery store may have been thawed and refrozen, or how long a package of frozen meat sat out before being frozen.

These Guys are the Real Deal

I’ve now talked and emailed at length with several members of the Butcher Box team–about the meat, the animals, the farmers, the packaging, even the copy on their website! I think these guys are the real deal. Although my diet is still mostly plant-based, it is so nice to be able to serve meat again without any pangs of conscience.

Not only have I become a customer, I’ve decided to partner with them. This is a decision I didn’t make lightly, and wouldn’t have even considered if I didn’t feel very strongly about the company and the product. But I’m eager to help them further their mission–and, if you choose to eat meat, I’d love to help you find meat you can feel good about eating.

Butcher Box is extending a special offer to Nutrition Over Easy fans who want to check them out: Save $10 off your first box–and they’ll also throw in a package of the best bacon you’ve ever had at no extra charge.  Click here to learn more. 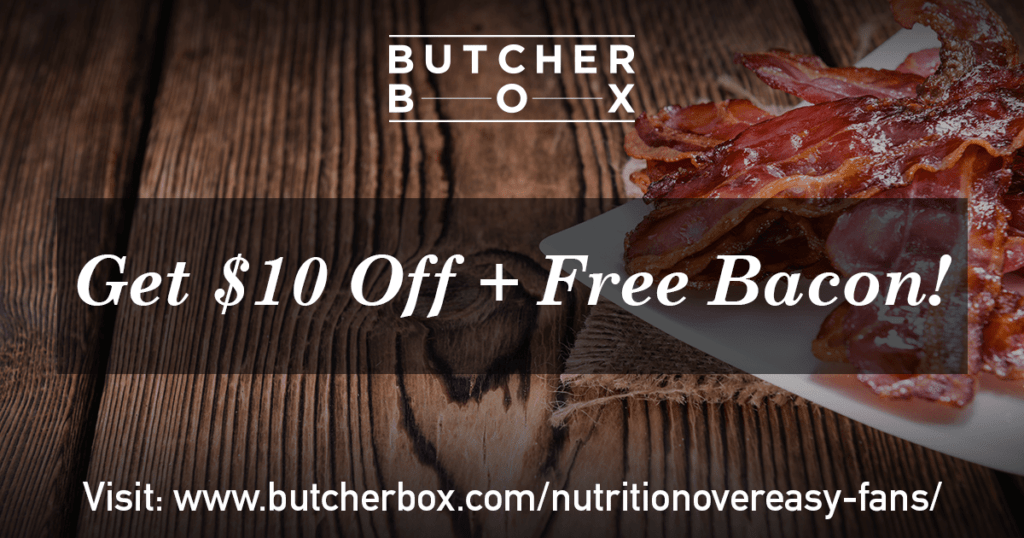