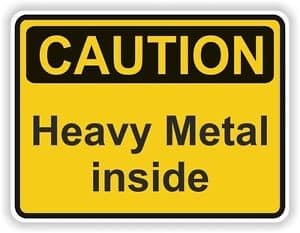 Jeff recently sent me a link to an article in Harper’s Bazaar, warning that our recent obsession with kale may have a sinister side-effect: heavy metal poisoning.

We’re not  talking about kale that’s being grown on industrial waste sites, either. Even organically managed soil contains a variety of naturally-occurring heavy metals, including arsenic, cadmium, and thallium. These metals are absorbed by plants grown in the soil, and leafy greens like kale and collards are particularly good sponges.

This is not a new thing and, in and of itself, isn’t really anything to worry about. Except for that peculiar tendency we modern humans have to overdo things.  Once kale was identified as a superfood, people didn’t just start eating it more frequently. They started eating it every day. Lots of it.  Not content with the amount they could actually eat in a day, people started juicing it so that they consume ten, twenty, or thirty servings a day.

Because if something is good for you, a whole lot of it is going to be that much better for you, right?

Now folks are turning up with with various symptoms and high levels of thallium in their blood. Jeff wants to know whether he should now avoid kale. Like the rest of us, he’s probably been eating a fair amount of it for the last few years. And the thing with heavy metals is that they build up in the body over a lifetime. So you don’t want to be eating a lifetime’s worth of kale before you get out of your twenties.

How worried should we be?

My kale intake goes up and down depending on the season–I eat more in the spring and fall, when it’s growing in my garden, and less in the summer and winter, when it’s not. But averaged over the year, I probably eat about 1 or 1.5 servings a week. And I won’t be changing my habits based on this news.

If, on the other hand, you’ve been juicing or eating large amounts of kale on a daily or near daily basis, it might be time to give it a rest. Not only is it possible to overdo just about anything, but I worry about what you’re missing–nutritionally and otherwise.

No “superfood” can offer the benefits that you can get from a wide variety of produce. Not only does this maximize your intake of nutrients but it it’s an easy way to avoid over-exposure to an (unseen) hazard.

See also: How important is a varied diet

Here are some quick tips on how to pick a healthy mix when shopping for produce.