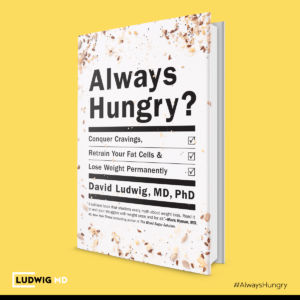 In general, I’m not a big fan of diet books. Even the best ones tend to be larded with hype and gimmickry. Basic nutrition principles are embellished into elaborate metabolic wizardry. Simple guidelines are obscured by unnecessarily complicated schedules, lists, programs, and templates.

Otherwise, how would you fill 300 pages? Because the basic tenets of any decent dietary philosophy can be communicated in a few paragraphs.  (Or as few as 7 words.)

But if you need a little more structure (and mythology) to get you motivated and keep you on track, the program outlined in David Ludwig’s new book Always Hungry is not a bad choice.

You’ll be eating about 1600 calories a day, which should allow most people to lose 1-2 pounds a week. And you’ll be cutting calories by limiting your intake of refined carbohydrates instead of reducing fat, which should make the whole thing less painful. In fact, that’s the approach I usually recommend.

In fact, for all the talk of “rewriting the rules on weight loss,” it doesn’t seem to me there’s anything terribly new about the underlying principle here. It’s essentially the same argument that Gary Taubes made in Good Calories Bad Calories back in 2008: Excess calories don’t make you fat, excess insulin makes you fat. Or in Ludwig’s words: Overeating doesn’t make you fat, getting fat makes you overeat.

The effect of insulin on fat storage, appetite, and weight is a valid and important insight. But, as I discussed most recently here, I don’t believe it’s the whole story.

Although Ludwig claims that his program will “retrain your fat cells” I think your success with his program will depend even more on the degree to which you can retrain your brain to new eating habits. Fortunately, most of the book is devoted to the behavioral program: preparing your environment, learning to eat more mindfully, reducing stress, and improving sleep, along with recipes, meal plans, shopping lists, and tracking sheets to help you develop new habits.

As for the promise that you will never be hungry and will quickly lose all desire for sweets and baked goods, I’d take that with a grain of salt. I think you’ll probably be less hungry on this plan than one with the same number of calories but lower in fat and higher in sugar. But I don’t think that this plan inoculates you against over-eating.

And, apparently, neither does Ludwig. Although he stresses that no calorie counting or portion control is necessary, I can’t help but notice that the meal plans include precise portions: 1 tablespoon of salad dressing, 2 tablespoons of shredded cheese or sour cream, 5 tablespoons of guacamole, and so on.  If you stick to the plan, you’ll enjoy lots of high-fat foods. But this is not a free-for-all.  Long term success will require long term mindfulness and restraint.

Ludwig offers his own personal experience as a testimonial along with the results of a “pilot study,” in which a couple hundred of his patients followed the program, lost weight, felt great, and had generally positive outcomes. I don’t doubt it! And to the extent that they (or you) can translate this program into a sustainable lifestyle change, I think it’s a great way to eat–and be–healthy.

See also: How to Lose Weight Without Dieting