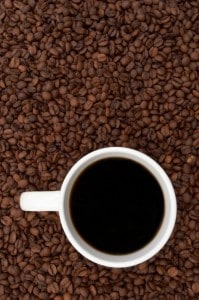 I’m sure you saw the headlines this week about coffee: Colon cancer survivors who drink 4 or more cups of caffeinated coffee a day have a reduced risk of their cancer coming back. By the way, 4 or more “cups” might not be quite as immoderate as it sounds: They are referring to teeny little 6-ounce cups, so we’re talking about one and half grandes here.

In any case, this is just the latest in a long list of studies, which link regular coffee and/or caffeine consumption to various health benefits.  I talked about many of these perks (haha! get it?) in an episode of the Nutrition Diva podcast: Is caffeine bad for you?

Perhaps one of the recent news stories linked to that 2013 article, because the day the study was released, a couple of new comments appeared there. Both of the writers seem to feel that coffee/caffeine is bad for you.  And both accused me of promoting coffee because someone is paying me to.

As if that were the only possible explanation for having a different opinion.

Hey, if “big coffee” is out there lining the pockets of researchers and journalists in exchange for misguiding the public about their product, I’m afraid I have been left off the dole.

Well, hang on. Full Disclosure: A publicist working for Starbucks did once ask to meet with me during the annual meeting of the Academy of Nutrition and Dietetics and she did buy me a cup of coffee.  But I’m afraid that’s as far as it went.

More to the point, I really don’t think there’s any big payola at work here. Although caffeine is not safe in every quantity or for every individual, there’s a very extensive body of research, conducted by dozens of unrelated researchers who have no financial ties to the outcome, with a long list of potential positives.

Here’s the thing: I don’t mind when people disagree with me or question my conclusions. I am happy to discuss the research, to consider other data or interpretations. I’m willing to change my mind in the face of new or better evidence. Or we might have to agree to disagree.

But instantly accusing anyone who doesn’t agree with you of being on someone’s payroll has unfortunately become a standard tactic, especially in discussions about nutrition. And I don’t mind telling you that I’m a little sick of it. It’s a cheap (and lazy) shot that shuts down any real dialog.  In some circles, hurling unfounded accusations at someone is considered libel.

I do occasionally get hired to write articles, give presentations, or develop recipes on behalf of a client. And if I’m writing on behalf of a client, I will tell you so. But even when I’m being compensated for my time, my opinion is not for sale. If I don’t believe in it, I don’t take the job.

Any questions? Let’s talk about it.