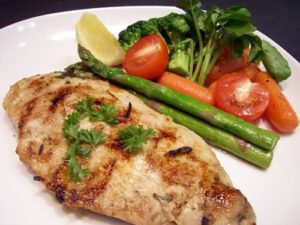 Here’s a small study that may change the way we think about carbs. Researchers found that the order in which we consume foods may have a substantial impact on our blood sugar response to those foods.

In a traditional nutritional analysis, these two meals would be considered identical. But it appears that even small differences in timing make a big difference.

Eating the carbs second had a major impact on blood sugar and insulin levels after the meal. Peak blood sugar levels were about 1/3 lower and the total rise in blood sugar was about 75% less when the subjects ate the protein and vegetables first. Theoretically, this should translate into greater satiety, less fat storage, and reduced inflammation.

These subjects were all overweight and diabetic, so we can’t say for sure whether healthy subjects would respond the same way. My educated guess? That the trend would be similar but the difference perhaps not as dramatic.

I’ll unpack this study and its implications in greater detail in an upcoming Nutrition Diva podcast but I wanted to get a quick bulletin out to you right away.

What do you think? Will this change how you approach your meals? Eggs first, fruit second? Cheese-then-crackers rather than cheese-and-crackers? Trade the pre-dinner bread basket for a piece of cake afterward?

(Then again, maybe the true benefit to this approach is that you get full before you get to the carbs!)