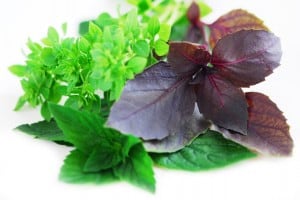 Q. Do dry herbs and spices have the same nutritional benefits as their fresh counterparts or are they only good for flavor?

A. It depends on which herbs and spices (and which nutritional benefits) you’re talking about!

Clearly, there is still plenty of nutritional benefit to be had from dried spices.

The Difference Between Fresh and Dried Herbs

When it comes to green herbs, some nutrients–and some flavor compounds–will inevitably be lost  in the drying process, and more will be lost with extended storage.   But that doesn’t mean that all dried herbs are nutritionally worthless.

How Do Fresh and Dried Herbs Compare, Nutritionally?

One tablespoon of dried basil (which is roughly the same amount) provides just 4% of the vitamin A, 43% of vitamin K, and only 2% of vitamin C.  It only has about 33mg of omega-3 fatty acids.   Apparently, quite a bit is lost in the drying process–although a third of a day’s supply of vitamin K is nothing to sneeze at.  It’s also possible that the dried basil they analyzed had been sitting on the shelf for a while and that a fresher sample would have fared better.

And despite the loss of certain nutrients, the ORAC  value of equivalent amounts of dried and fresh basil is actually about the same, which suggest that both are a significant source of antioxidants.

Dried and Fresh Herbs Both Have a Place in Your Kitchen

For maximum flavor and nutrition, you want to pick your herbs right before you use them.  All fresh vegetables–including herbs– will lose nutritional value just sitting in your refrigerator, or the grocer’s case.

See also my podcast on growing and using herbs.

When fresh herbs aren’t an option, dried herbs still are a source of both nutrition and flavor.   But again, I wouldn’t expect a whole lot of flavor or nutrition from  a dusty bottle of dried herbs that’s been in your cupboard for several years. Every fall,  I dry a supply of oregano, rosemary, mint, and thyme—just enough to get me through the winter until I can start growing them outside again.

Want to learn more about food and nutrition? Subscribe to the Nutrition Diva podcast wherever you listen.

19 thoughts on “Do Dried Herbs and Spices Have Nutritional Value?”