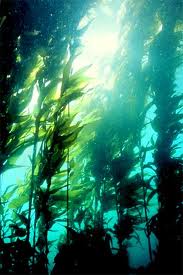 Q.  On this website, it says that kelp is very high in sodium.  But it also says that 10 grams (2 tablespoons) of fresh kelp has just 23 mg of sodium, or 1% or your daily needs. These two statements seem to contradict each other. Which is correct?

A.  Sea vegetables tend to be higher in sodium than land vegetables–after all, they grow in sea water! Nonetheless, fresh kelp is not high in  sodium.  Dried seaweed will obviously be a more concentrated source of sodium.  In fact, dried kelp granules are often sold as salt substitute.

Powdered kelp adds a salty, savory flavor to dishes but has just a fraction of the sodium of regular table salt. Plus, kelp is rich in other nutrients, including iodine.  For more about the nutritional profile and health benefits of different types of seaweed, see my podcast “Is Seaweed Good For You?”

Why Does Nutrition Data Say Kelp is High In Sodium?

As for the contradictory information you found on NutritionData.com:  As it happens, I’m fairly familiar with this site.   I spent four years as Chief Nutritionist for Nutrition Data and although I’m no longer associated with them, it seems I am destined to remain the Chief Explainer for the site!

In any case, you’ve stumbled across a little weakness in the way the site reports nutrition info.  The statement “This food is very high in sodium” is automatically generated for any food that contains more than 20% of the daily allowance for sodium in a 200-calorie serving. That’s all well and good for foods like potato chips or pasta, where 200 calories represents a reasonable portion.  But in order to get 200 calories’ worth of kelp, you’d have to eat an entire pound of the stuff–which I doubt you’d ever do.   Nonetheless, 200 calories’ worth of kelp contains about 1000 mg of sodium, or almost half the daily allowance, so it triggers the Nutrition Data “high sodium” warning.

4 thoughts on “Is Kelp High in Sodium?”