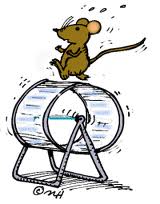 Q. I read recently that the consumption of caffeine prior to exercise will assist the body in using body fat as fuel, up from 21% to 40%. The remaining fuel comes from stored carbs. Any truth to the story?

A. There may be a grain of truth to the story but not much more.  Taking caffeine  before exercise has been shown to increase energy expenditure (the number of calories burned) during exercise by around 10%.  So if you would normally burn 200 calories in a half-hour, some extra caffeine might help you burn 220.  Caffeine may also delay exercise fatigue and otherwise boost performance a bit. I didn’t find any evidence, however, that it increases the amount of fat used as fuel. Generally, the body taps into fat stores when available carbs have been depleted.

But here’s a little-known benefit of combining exercise with caffeine: Researchers have found that drinking caffeine and exercising regularly may decrease your risk of skin cancer (at least if you’re a mouse)!

9 thoughts on “Does Caffeine Increase Fat-Burning During Exercise?”