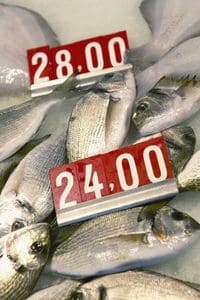 Q. Is imported frozen fish from countries like India and Vietnam safe? I avoid buying any food imported from China but I bought frozen Swai Basa Fish (farmed) from Vietnam and frozen Squid (caught wild) from India. They tasted really good and they were cheap, but I’m wondering if we can trust those imports or they may be full of some toxic stuff.

A.  Theoretically, the safety of fish being sold in U.S. markets is monitored by federal agencies such as the FDA, whose job it is to be sure that the fish sold for human consumption in the U.S is “safe, wholesome, and not misbranded or deceptively packaged.”  (Institute of Medicine on Seafood Safety)

But as we’ve seen lately, the ability of the FDA to effectively police the food supply and enforce its regulations is in serious doubt. Just a few years ago, for example, there was a scandal in which salmon being sold for a premium as “wild-caught” in both wholesale and retail markets turned out to be cheap farmed salmon. ( Story from New York Times)

To make things even more challenging, fishing and farming practices are changing rapidly around the globe as demand for seafood increases.  New restrictions and best practices are being implemented. But loopholes and work-arounds are also constantly being discovered and exploited. It’s a moving target!

The best resource I’ve found to keep up with these issues is Seafood Watch. These guys are working hard to stay on top of all of these issues and to provide up-to-date resources for consumers trying to make safe and responsible choices. They have a number of tools for consumers, including a mobile app for your smart phone or a low-tech wallet card, as well as in-depth reports.

I scanned Seafood Watch’s reports on both the fish you mentioned.  In terms of toxins or contaminants, I didn’t see too much to worry about with the wild-caught squid, but thesecomments on farmed swai basa got my attention:

The safety of these fish as food obviously depends primarily on the water they’re raised in and the food they are fed. They might be perfectly fine, but it doesn’t look as if anyone is paying too much attention.

From a sustainability perspective, which is more about the long-term health of the oceans than the safety of the food, both wild-caught squid and farmed swai basa are considered “good alternatives” but not “best choices.”