Q. I’ve been seeing ads for Onyx Sorghum, specifically its use in certain cereals. This supposed “miracle” grain apparently contains a lot of antioxidants. However it looks like the high tannin content might affect iron absorption. Could this whole grain fit into a healthy and balanced diet or might it do more harm than good?

A. Sorghum is a whole grain that we’ve hearing more about lately.  Onyx (or black) sorghum is a special type of sorghum that is a dark red or black color intead of the usual pale beige.  It was created by plant geneticists at Texas A&M, who used traditional cross-breeding techniques and not genetic modification to create the richly hued grain.

As with berries and other plants, the pigment that gives onyx sorghum its distinctive color also happens to be rich in antioxidants. However, some of those antioxidants are in the form of tannins, bitter compounds that are also found in tea, coffee, wine, and other plants.  Tannins, in addition to acting as antioxidants can interfere with the absorption of iron and other minerals. Do the benefits outweigh the potential downsides? 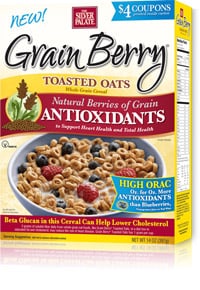 A company called Grain Berry currently has an exclusive license to use this special grain in their line of breakfast cereals.  The cereals are promoted as being super high in antioxidants–mostly due to the onyx sorghum.

We’ve all been trained to believe that the more antioxidants something contains, the better it is for you.  But the truth is that there’s a point at which more antioxidants don’t actually provide any additional benefit–and that point is lower than most people think! In fact, the high ORAC value that this cereal touts has pretty much been abandoned by nutrition scientists as being largely irrelevant to human health.

On the other hand, I don’t think we need to worry about this grain (or this cereal) causing iron or other mineral deficiencies. It’s true that tannins can interfere with mineral absorption. But this is only a concern for those who are subsisting almost entirely on diets made up high tannin grains.  That’s probably not going to apply to anyone buying Grain Berry cereal!

As is often the case, both the benefits and the potential dangers of this new “miracle” food have been over-hyped. As a whole grain, onyx sorghum certainly fits into a healthy and balanced diet. But in this cereal, I think it offers more of a marketing hook than a novel health benefit.