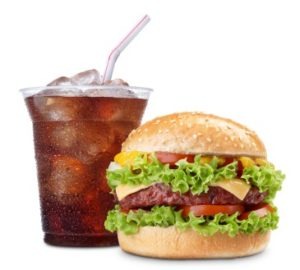 One of the reasons I suggest drinking only water (or unsweetened tea or coffee) with meals is that calories you drink don’t contribute at all to your sense of satiation.  In other words, you’re not likely to eat any less to compensate for those extra calories you’re drinking. They just get added to the total.

Conversely, replacing a caloric beverage with water is an easy way to subtract a few hundred calories from a meal without noticing a thing!

But here’s another log to throw on that fire: A small but meticulously done study finds that drinking a sweetened beverage along with a meal substantially increases the amount of fat that gets stored from the meal. Who needs that? The effect is magnified when the meal is high in protein, such as drinking a soda with a burger or chicken.

Interestingly, the study did not see the same effect with artificially-sweetened beverages. Although I recommend limiting your intake of diet soda, this would be one scenario where a diet soda might be a better choice than a regular soda (but still not as good as water).