Two items crossed my Facebook feed within the last week or so that were textbook examples of how science is ridiculously twisted in pursuit of clicks.

The first one was just silly. 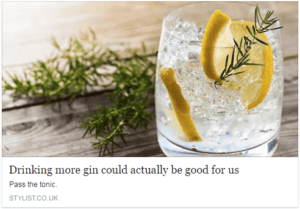 In her column for the British website Stylist, headlined “5 Reasons Drinking Gin Could  Be Good for You,” Amy Lewis explains that juniper berries contain vitamin C and other antioxidants and phyto-compounds which, she claims, can fight colds and flu, protect the skin from drying, and boost digestion.

Forget for a moment that there is no credible evidence that juniper berries provide any of these health benefits. Let’s pretend, in fact, that these were all demonstrated effects of the juniper berry. What would this have to do with drinking gin? Absolutely nothing.

Juniper is one of many aromatics that can be used to infuse gin with its distinctive flavors. But how much of the nutritional value is transferred from the berry to the gin? According to the USDA foods database, gin contains exactly 0.0 mg of vitamin C. There’s no data on any of the others but I think we can extrapolate.

The entire article was pure fluff and fantasy. But I’m sure it drove plenty of traffic to the website. Commerce: 1   Knowledge: 0.

The second example, strangely enough, also featured an alcoholic beverage. Can you believe that this was posted on  a website affiliated with Weight Watchers?? 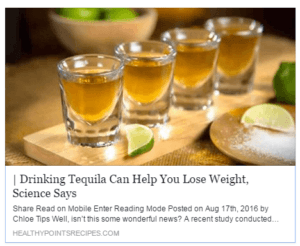 In the article, blogger “Chloe” discusses a study from the American Chemical Society (hey, at least this one actually involved study!). Researchers identified a non-digestible carbohydrate in the agave plant. They fed this fiber-like carbohydrate, called “agavin,” to rats, and the rats ate less.

OK, let’s just go ahead and pretend that this study was done in humans instead of rats and had the same effect. What does this  have to do with tequila? Absolutely nothing.

Tequila is, of course, distilled from agave. Does a shot of tequila contain any “agavin” at all–much less a meaningful amount? Who  knows? No-one has checked. (But I highly doubt it.)

And what was that headline again? Oh yes: “Drinking Tequila Can Help You Lose Weight, Science Says.”

Science says!!  Shots for everyone!

I don’t know how that one slipped by the gate-keepers at Weight Watchers but you can be sure they were rewarded with tens of thousands of clicks when this went viral.

Sigh. Sometimes the stupid just seems too big to fight.

3 thoughts on “How the media distorts science. (Harumph!)”