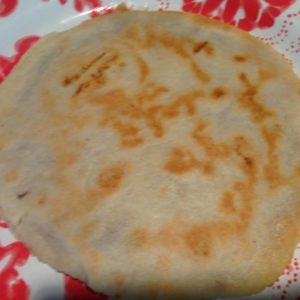 I recently received samples of two new grain-free tortillas from Texas-based Siete Foods–one made from almond flour and the other from cassava and coconut.

Tortillas that are gluten-free, grain-free, dairy-free, vegan (almond only), and Paleo-friendly will have obvious appeal to a wide range of “special needs” dieters.  And these are quite tasty!

The ingredient lists are short and sweet and each tortilla tastes reassuringly of its namesake ingredients–the almond having a warm nutty flavor and the cassava/coconut tasting faintly of fresh coconut.

Neither variety was pliable enough  to work well for a wrap or soft taco. (Although you can soften them up on a warm griddle or in the microwave, they quickly stiffen as they cool.) But both worked beautifully for toasted quesadillas, and crisped up nicely as oven-baked tortilla chips, as well. 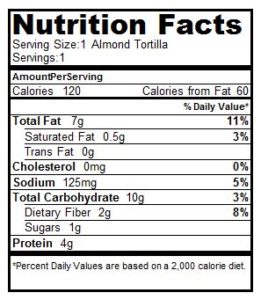 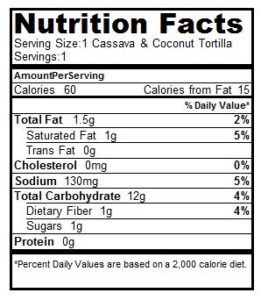 Nutritionally speaking, there are notable differences. Despite being the same size, the almond tortillas have twice as many calories (120 vs 60 per 7 inch round). Both have about the amount of carbohydrate (10-12 g) but the almond tortillas are substantially higher in fat (7 g vs. 1.5 g) and protein (4 g vs 0 g).   And while the almond variety are vegan, the coconut cassava tortillas include a small amount of pasture-raised(!) lard.

Unfortunately, all that dietary purity comes at a hefty price: about $8 per 8-pack. Because I don’t need to avoid grains or gluten, I’ll probably stick with my $3.00 packs of organic whole wheat and corn tortillas. But if you’re in the market for a grain-free tortilla, you probably won’t find any better than these.