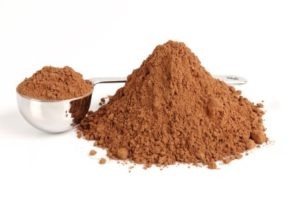 In last week’s episode of the Nutrition Diva podcast, I had some suggestions for ways to use cocoa powder as a savory spice, rather than a sweet ingredient. The idea was to increase your intake of those healthy cocoa flavanols without increasing your sugar and fat intake.

But some of you wrote with concerns about cadmium in cocoa powder. Cadmium is a heavy metal that, like lead and arsenic, occurs naturally in soil. Heavy metals in soil can also be the result of industrial pollution. These metals can be absorbed from the soil into plants–and some plants are better at sucking up heavy metals than others.

It’s not uncommon for foods to contain trace amounts of these metals–coffee, rice, cocoa, tea, and fancy salts are common sources. And this is not necessarily a concern. However, because heavy metals can accumulate in the body and are known to be toxic at high levels, we do what we can do avoid excessive exposure.

Last year, Consumer Alert raised an alarm over the amount of cadmium in some brands of cocoa powder and dark chocolate. Although there was a significant difference between the brands with the lowest and highest amounts, even the “worst offenders” contained only a fraction of the amount considered to be safe for daily consumption.

Nonetheless, the bad press has the chocolate industry scrambling to reduce the amount of cadmium in chocolate even further. In the meantime, if you want to minimize your risk, you may want to steer clear of Sunfood Raw Cacao and Trader Joes Unsweetened Cocoa Powder, both of which tested at the upper end of the range in cadmium. Ghiardelli’s Unsweetened Cocoa powder was one of the lowest in cadmium but (sadly) was also among the lowest in antioxidant flavanols.  You can’t have everything.

But for what it’s worth, the brand of cocoa powder in my cupboard right now was one that Consumer Labs found to be “high” in cadmium. And I am not in the least concerned about it.  As long as you’re not consuming cocoa and/or dark chocolate in excessive quantities (say, more than 4 oz of dark chocolate or 2 T of cocoa powder every single day), I think the benefits probably outweigh the risks.

Here’s a detailed review of various health claims related to cocoa from the team at HealthyButSmart.com

8 thoughts on “Cadmium in cocoa powder”