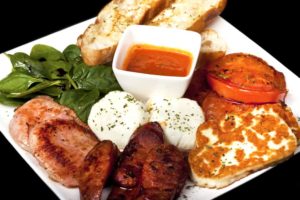 Fast food and chain restaurants like Applebee’s and Olive Garden have gotten a lot of public shaming about the calorie content of their menu items. Meals eaten at these restaurants typically provide around 1200 calories, which is far more than we should probably be eating at any one meal.

Researchers from Tufts University wondered whether diners fare any better at non-chain eateries, so they collected meals from a variety of independent restaurants in Boston, San Francisco, and Little Rock and sent them off for analysis. They found little difference between chain and non-chain restaurants in terms of the calorie content of the meals. But the research did reveal substantial differences between various cuisines.

Watching Your Weight? Go for Greek

For the study, they identified the nine most popular cuisines and the most popular menu items at each type of restaurant. Then, they collected matching meals from several restaurants in each category in each of the three cities.

It should be said that these meals don’t necessarily reflect a given culture’s traditional cuisine.  They represent the version of these cuisines that’s typically served in American restaurants. (I’ve never been to China, but my understanding is that the food served in Chinese restaurants in America bears little resemblance to the food you’d eat in China.)

According to these findings, eating out without blowing your calorie budget may come down to what type of restaurant you pick. Although none of the meals could be considered low calorie, the difference between the lowest (Greek) and the highest (Italian) is more than 600 calories, or the equivalent of an entire extra meal.

Here are the average calorie counts for a typical meal in each of the nine most popular restaurant types, arranged from lowest to highest.

Eating healthy isn’t just about calories, of course.  And it’s reassuring to note that the 3 cuisines with the lowest calorie counts also tend to feature more nutrient-dense foods.

Of course, no matter what type of restaurant you choose, there will be better and worse choices on the menu. Here are some tips on choosing wisely when eating out.