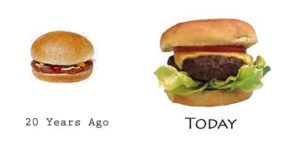 A new analysis of diet and exercise data from thousands of people across several decades has come to a shocking conclusion.

“The study concluded that a person in 2006 who consumed the same number of calories and exercised the same amount as someone in 1988, would have a BMI that was 2.3 points higher.” (quote is from CNN’s coverage)

It’s certainly possible that stress, loss of sleep, and environmental pollutants may play a role in this finding. But suspect a BIG part of these findings is that we’ve gotten (even) worse at recalling and reporting our food intake and activity levels.

These studies rely on self-reported food intake to estimate how many calories people are consuming. And the questionnaires rely on your memory of what you’ve eaten on a previous day, or how often you might have eaten a given food over the previous weeks.

But these days, it’s not just about remembering what you had for breakfast, lunch, and dinner. We eat constantly throughout the day, in every location, and during every activity. (Why do they now sell candy at the check out in hardware stores??) Who can remember everything they put in their mouth over the course of the day when a day includes 29 eating occasions?

I think we may also be losing our ability to estimate “normal” or “standard” portion sizes.

Over the last ten years, our perception of whether someone (including ourselves, our spouses, and our children) is overweight has changed. Overweight is the new normal.

Now think what has happened with portion and package sizes over the same time. What might have looked like an obscene plate of pasta in 1988 now looks like a standard serving–and that’s got to affect the results of these self-reported diet intake surveys.

Perhaps the real headline here isn’t that people who eat the same number of calories are heavier than they would have been 2 decades ago. Maybe people are whole lot more likely to under-report our calorie intake than we were two decades ago.

2 thoughts on “Is weight gain now beyond our control?”