Jill sent me a link to this New York Times article asking for my take. 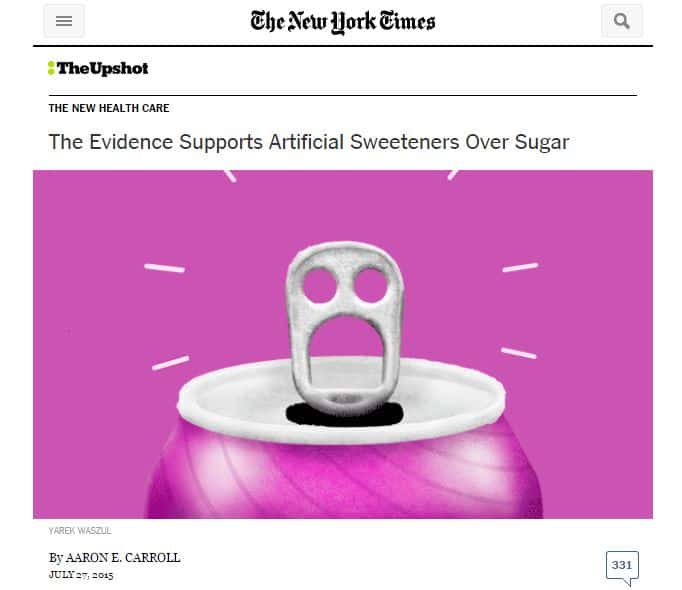 The author’s friends are engaged in what he feels to be a nonsensical debate over whether artificial sweeteners are better or worse for you than sugar. “There appears to be a correlation between sugar consumption and health problems,” he states. “None can be detected with artificial sweeteners.”

He goes on to debunk some fairly dusty old rumors about artificial sweeteners causing brain tumors, cancer, and ADHD.  And while I agree with him that these particular concerns are unwarranted, I don’t agree that no potential health problems have been identified. He ignores, for example, new research showing that noncaloric sweeteners affect intestinal bacteria in ways that may promote obesity.

He goes on to enumerate all the ways in which large quantities of refined sugar do harm health–no argument from me there–and concludes that you are far better off drinking diet soda than regular soda.

In fact, I think Carroll’s entire argument falls apart in the first paragraph, where he writes:

” Unless you want to forgo all beverages that are sweet, you’re going to run into one of these.”

As for the relative dangers of sugar vs. artificial sweeteners, if soda is a once a month sort of thing, rather than a once a day habit, I don’t think you really need to worry about either one.