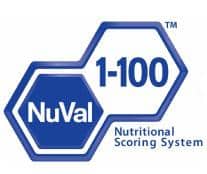 Q. My local supermarket has added ‘NuVal’ nutrition scores to most of the labels in the store. How accurate do you think they are for judging the healthfulness of food? I can’t find details about how the NuVal score is calculated but sodium seems to be a factor. A low sodium version of the same product will score higher.

A. NuVal is the commercial incarnation of the Overall Nutrition Quality Index or ONQI, a nutrition scoring system that’s been in development for several years.  Foods are scored on a scale of 1 to 100,  using a complex equation that takes into account a long list of vitamins, minerals, fiber, types of fat, protein quality, energy density, glycemic load, and so on.    “Good” nutrients like antioxidants or omega-3 fats  bring the score up; “bad” nutrients like cholesterol, sugar, and sodium bring the score down. The basic idea is to save shoppers time and simplify the task of selecting healthy (or at least healthier) foods.

NutritionData.com, a website I used to be affiliated with, developed a similar system called the ND Rating, which scored foods on a scale of 0 to 5, based on similar criteria.

I see two main disadvantages of these scoring systems. First,  they set the nutritional priorities, not you.   For example, foods “lose”  points if they are high in cholesterol and “gain” points for being high in fiber.   What use is that if you’ve embraced the “paleo” diet theory, which emphasizes animal proteins and eschews all grains?

The other disadvantage is that crunching all the data into a single number obscures the various  “plusses” and “minuses.” For example,  a food that’s high in sodium but low in sugar could end up with the same rating as a food that’s just the opposite: low in sodium but high in sugar.   But depending on whether I have diabetes or high blood pressure, the two choices are hardly comparable.

Inevitably,  a system that attempts to rate everything from soup to nuts with a single formula will frequently run afoul of common sense.  For example,  unsalted, unbuttered popcorn (relatively harmless as snack foods go but not exactly a nutritional powerhouse) rates twice as high as a skinless chicken breast.  Systems like these are probably most useful (but still not infallible) when used to compare foods within fairly tight categories, such as breakfast cereals or canned soups.

Also, keep in mind that the NuVal scoring system doesn’t take serving size into account. That’s still up to you.   High NuVal Scores don’t necessarily mean that a food can or should be eaten in unlimited quantities.

Finally, it seems as if the main application of these scoring systems is to rate and rank processed foods.  A simpler way to improve nutrition might be to buy more food without labels and ingredient lists.

5 thoughts on “Pros and Cons of Nutrition Scoring Systems”