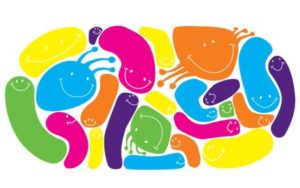 But I missed an opportunity to clarify what I think is a widespread misunderstanding about probiotics. Many people think of all probiotic supplements and foods as being somewhat interchangeable. They’re not.

Probiotics: an umbrella term for thousands of different bacteria

In terms of labeling foods and supplements, the FAO/WHO defines probiotics as “Live microorganisms which when administered in adequate amounts confer a health benefit on the host.”  That’s any health benefit.

There are hundreds of different strains of lactobacillus bacteria and they offer a variety of potential health benefits to humans. Some colonize the large intestine, others live in the lining of the stomach, still others have an affinity for the mucus membranes in the nose.  Of the many strains likely to colonize the large intestine, for example, some may improve gut immune function, others digest complex sugars, others may benefit the host by producing vitamin K.

There are also lactobacillus bacteria that don’t do much of anything to improve or defend your health. These, while harmless, would technically not be classified as probiotics–although they might still be considered “live and active cultures.”

Most probiotic foods contain a variety of bacterial strains–your average supermarket yogurt might contain six different bacterial strains. And the lactobacillus bacteria found in yogurt are not necessarily the same as those found in other fermented foods like kefir or kim-chi.

Many of the studies you read about use “boutique” strains that are not likely to be found in any traditionally-fermented foods. In the case of the study I mentioned above, for example, they used two trademarked strains called Lactobacillus acidophilus NCFM and Bifidobacterium lactis Bi-07.

Is there any point to consuming probiotic foods?

I still think there are general health benefits to eating traditionally-fermented foods like yogurt, kefir, kim-chi, kombucha, sauerkraut, and miso. Eating a variety of fermented foods, which provides a wider variety of bacterial strains, might offer a wider range of benefits.

But we need to be careful about assuming that the findings on a particular strain apply to all probiotics and probiotic foods.  If you’re going for a specific therapeutic benefit, such as protecting against side effects while taking antibiotics or improving flu resistance, there’s no guarantee that yogurt or any other fermented food will contain the same bacteria as were used in a particular study.

Similarly, when shopping for probiotic supplements, pay attention to the individual strains in that supplement and how they compare with the strains used in various studies you might be responding to.