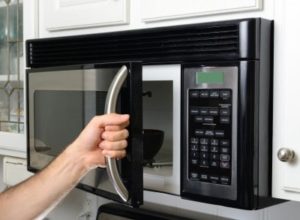 Solid information about how various cooking methods affect antioxidant content of vegetables is scarce…and much of it seriously out-dated.  Here are new findings, just published in the Journal of Food Science.

There’s a persistent urban legend that microwaving destroys nutrients. People often cite a certain, badly-designed study, in which broccoli was cooked (submerged in water) in a microwave for a ridiculously long period of time. Not surprisingly, the nutrient content was decimated.

However, this latest study shows that microwaving vegetables without water and only until tender appears to minimize nutrient loss. In general, dry cooking methods, like baking, grilling, or microwaving, protect nutrients better than boiling or pressure cooking.

In terms of nutrient losses, water is your worst enemy. Losses during pressure cooking were only about half of losses from boiling, however. And, unfortunately, they did not include steaming in their trial. (Why do researchers keep overlooking this common cooking method?!?)

Some vegetables hang onto their nutrients better than others

Regardless of cooking methods, certain vegetables seem to hang on to their nutrients better than others.  Beets, artichokes, green beans, and garlic seem to keep more of the antioxidant powers, regardless of how they are cooked.

Carrots, celery, and green beans actually were more potent in scavenging free radicals after they were cooked.  Researchers aren’t sure why but speculate that additional antioxidants might be “liberated” due to cell wall destruction during cooking, or that new antioxidant compounds might be formed by “thermal/chemical reactions.”

If you’d like to read the whole study, you’ll find it here.  But don’t get too hung up on the details.  Although how you cook vegetables does affect nutrient content, the most important thing, by far, is to eat a variety of vegetables, and plenty of them. Eat some of them raw and cook the rest however you enjoy them most!