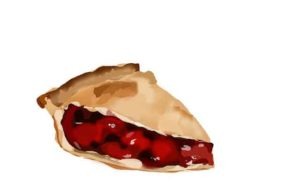 Q. I’ve been reading that lard is now considered a good fat, as long as it’s not hydrogenated. I realize that lard is still saturated fat, so it’s not ‘good’ like olive oil. And like all fats, it must be eaten in moderation.  But I’m wondering what you think about going back to Gramma’s pie crust recipe. Crisco/butter just never did make the same good crust …

Q. Like Crusty Curious, I’ve also been wondering about lard and pie crusts, as well as other saturated fats. If we limit our intake of saturated fats to recommended amounts, does it matter what TYPE of saturated fat we use? Are palm oil, coconut oil, butter, lard, and beef drippings (for homemade gravy) all equivalent, nutritionally? Or is there some good reason to avoid certain of these?

A. Pie crusts are a matter near and dear to my heart and I’ve been collecting pie crust recipes for years. My current favorite uses a mixture of butter (for flavor) and lard (for flakiness).  But you will find equally ardent advocates for all-butter crusts and even some die-hard shortening devotees.

Epicurious.com’s Food Editor Sarah Kagen has long been a fan of this recipe, which uses part butter and part shortening. “But lately,” she says, “I’ve had several crusts made with part butter and part lard, and I have to say, I think I’ve been converted. The lard creates flakiness like shortening, but it adds a wonderful golden toastiness.”

Epicurious.com’s Associate Editor Lauren Salkeld (who is a graduate of the French Culinary Institute’s Classic Pastry Arts Program) says, “We made all butter dough in school, so that’s what I’m used to. I find it flaky and I prefer the flavor.”

Aside from the culinary debate, is there any difference nutritionally between butter, lard, and the naturally saturated fats found in palm kernel and coconut oil (used to make trans-fat free shortening)?

Here are a few facts that might surprise you :

1. Butter contains about 20% less fat and calories per ounce than lard or saturated vegetable fat, because it contains some water. (When substituting butter for other fats, adjust quantities accordingly.)

7. Both palm kernel and coconut oils contain natural phytosterols, which can help to reduce cholesterol levels by blocking the cellular uptake of cholesterol.

Regardless of what form of fat you’re trying to build a case for, you can find some support for it here. And of course there’s the argument that saturated fat isn’t really bad for you, anyway; it’s the carbs you eat with it that do the damage. (More comforting for bacon eaters than pie lovers.)

No matter what form of fat you use, of course, pie crust is not a low-fat item.  One slice of a double-crust pie will use up about a quarter of your daily allowance of fat and around 80% of your allowance for saturated fat (not counting the filling).

So, in answer to the questions above, as long as your overal intake of fat, calories, and saturated fat is not excessive, and you are avoiding all hydrogenated products, use whatever you like to make your pie crust. (And send me your recipe!)

One thought on “On lard, pie crusts, and whether all saturated fats are the same”