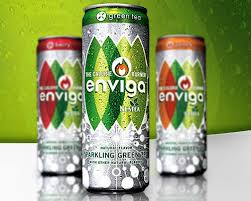 What’s better than zero-calorie soft drinks? Calorie-burning soft drinks! If you live in New York or Philadelphia, you’ve probably already seen the billboards. For the rest of us, the onslaught is scheduled to begin in 2007. But the buzz around Enviga, Coca-Cola’s new “negative-calorie” beverage, is already growing.

The calorie-burning claim for Enviga is based on two “active” ingredients, caffeine and EGCG, a green tea extract. In combination, these ingredients are purported to boost your metabolism and increase the number of calories you burn each day. (The artificially-sweetened soda contains about 5 calories per can.)

Enviga is not the first calorie-burning soda on the market. Elite FX introduced a similar product called Celsius in 2005, but the product never really pushed through into the mainstream. Coca-Cola’s massive marketing push for Enviga will change all that.

The burning question: Does it work?

The Center for Science in the Public Interest doesn’t think so. The plucky consumer watch-dog group is threatening to file a lawsuit against Coca-Cola, based on what it considers to be “fraudulent” claims for Enviga’s calorie-burning powers. Even big companies like Coca-Cola have to take the CSPI’s guerilla tactics seriously. Earlier this year, Kentucky Fried Chicken decided to change their recipe, in part due to the publicity surrounding a similar lawsuit filed against them by the CSPI.

But are the claims for Enviga truly fraudulent or merely exaggerated? Coca-Cola is basing their calorie-burning claim on unpublished research that it conducted in partnership with the University of Lausanne in Switzerland, showing that consuming 600mg of caffeine and 270 mg of EGCG can help you burn an extra 66 to 100 calories per day. Note that the study didn’t actually use Enviga. Instead, the subjects took a pill that contained 600 mg of caffeine and 270 mg of EGCG, the amount equivalent to 3 cans of Enviga. It’s also worth noting that none of the subjects were over-weight.

Those findings are in line with another small Canadian study that was published last year in the British Journal of Medicine, which found that daily consumption of caffeine and EGCG increased energy expenditure by about 180 calories per day. What’s interesting about the Canadian study that they compared the effects of different levels of EGCG, ranging from 270 to 1200 mg per day, plus a standard amount (600 mg) of caffeine. The amount of calories burned was the same regardless of how much EGCG the subjects consumed. It makes you wonder how much of the calorie burning effect is actually due to the caffeine.

Based on this research, I think we can tentatively conclude that the combination of caffeine and EGCG may lead to a small increase in calorie expenditure. You could get that combination from Enviga, from supplements, or even from drinking one cup of coffee followed by one cup of green tea, three times per day. But let’s put the benefit in perspective. If you burn an extra 80 calories per day, it would take you six weeks to lose one pound. It would also take 131 cans of Enviga, which as the suggested retail price of $1.29 a can would set you back around $170.

Or, you could burn the same number of calories by walking at a moderate pace for about 22 minutes every day for 6 weeks. (To see how easy it can be to burn a few calories, visit the ND Calories Burned Calculator)

But, hey, it’s your buck. And regardless of whether Enviga delivers any substantial benefit, I predict Coca-Cola is going to have a big commercial success with it. If you do decide to try Enviga, keep in mind that each can contains as much caffeine as a cup of strong coffee, about 5 times as much caffeine as a can of Coca-Cola. So you might not want to drink Enviga too close to bed time.

To mimic the effects of the research study, you might also want to take your caffeine + EGCG an empty stomach, 30 minutes before each meal.