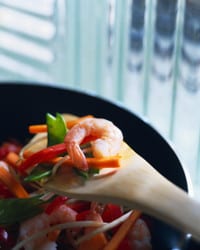 Q. I enjoy using cast-iron cookware and I have heard that it can increase the iron content of some foods during cooking.  Is this a safe source of iron and are there any foods that I shouldn’t be cooking in cast-iron?

A. It’s true! Acidic foods like tomatoes can react with the metal in a cast-iron skillet and actually absorb some of the iron molecules. This is a safe and effective way to increase your iron intake.

So, how much of a difference does this make in the iron content of foods? Potentially, a lot.

Researchers cooked several foods in new cast iron skillets and found, for example, that the amount of iron in spaghetti sauce increased from less than a milligram to almost 6 mg per serving.  Applesauce absorbed even more, going from 0.35 mg to 7.3 mg per 100g serving.  Scrambling eggs in a new iron skillet increased the iron content from 1.5 mg to almost 5mg.  (Brittin HC, Nossaman CE. Iron content of food cooked in iron utensils. J Am Diet Assoc. 1986;86:897–901. )

The greater the acidity of the food and the longer you cook it, the more iron is transferred to the food.  Foods that contain more water also seem to absorb more iron.  But you probably won’t be adding quite as much iron to your foods as the researchers in this study because they were using new pans.

The older the pan, the less iron you get

Older cast iron pans, which have become well seasoned through use, tend to transfer less iron to food. This isn’t because the iron in the pan has been used up; it’s because a well-seasoned cast iron pan has a thin coating that is formed when fat is heated to high temperatures in the pan. This coating makes the pan less reactive with the acid in foods.

Yes, but how does it taste?

Now, the nutritionists who did the study didn’t make any comment about how the foods tasted after they were cooked in the pans.  But its probable that the foods that absorbed the most iron also picked up a metallic taste.

In a similar experiment conducted from a completely different point of view, the editors of Cook’s Illustrated magazine found that cooking acidic foods even in well-seasoned cast-iron pans can impart a metallic flavor to foods if you cook them long enough.  Tomatoes that were cooked for 15 minutes in a well-seasoned cast iron skillet absorbed no off flavors, but those cooked for 30 minutes did.  Foods that were either less acidic or that were cooked more briefly, picked up no off flavors.

Because they’re more concerned with the the success of your recipes than your nutritional status, the folks at Cook’s Illustrated recommend that you use stainless steel cookware when cooking acidic foods for more than a few minutes in order to reduce the chance that your dish ends up with an unpleasant metallic taste.

But even the small amounts of iron that you will add to your diet by using your well-seasoned cast-iron cookware to cook non-acidic foods can add up to a meaningful increase in your iron intake.

7 thoughts on “Cast iron pans can increase your iron intake”