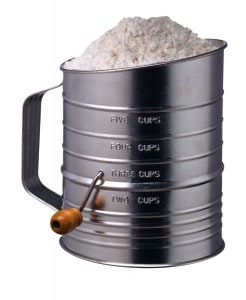 Q.  Do alternative flours such as almond flour offer any real health advantages and if so (or if not), why?

A.  It’s hard to say that something is good for you based entirely on what it isn’t!  Whether alternative flours offer any health advantages over wheat flour really depends on what you’re avoiding (and why), which ones you choose, and what you’re making.

For example, if you are gluten intolerant, then using a gluten-free flour instead of wheat flour definitely offers a significant health advantage!  Be forewarned, however, that substituting gluten-free flour in recipes developed for wheat flour will yield a very different result.  The gluten in wheat flour helps bread rise and is responsible for the chewy texture of wheat-based baked goods.  It’s possible to compensate for the absence of gluten with other ingredients and techniques, but it’s tricky!  Your best bet is to use recipes specifically developed for gluten-free flours rather than simply substituting alternative flours for wheat flour in your recipe.

What Are You Using Instead?

Aside from avoiding gluten (which is only beneficial if you are gluten intolerant), any nutritional differences will depend on exactly which alternative you choose.

Obviously, which of these differences constitute a nutritional advantage depends on what you’re looking for.  If you’re interested in reducing carbohydrates, for example, nut meals offer an advantage.  But if you want to limit fat or calories, they wouldn’t necessarily be the best choice.   And other than being gluten-free, rice and oat flour don’t seem to be much of an improvement over wheat flour, which is higher in protein and fiber.

What Are You Making?

Finally, what are you making with your alternative flour?  A cake made with millet flour instead of wheat flour is still a cake, not a health food.   Sweet treats and baked goods should be enjoyed in moderation, no matter what kind of flour they’re made with!

One thought on “Wheat-Free Baking: Are Alternative Flours Healthier?”