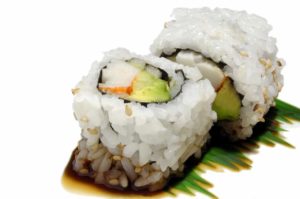 This week I have a pair of episodes on the trending Low Histamine Diet. In the first, I explain who might benefit from reducing their dietary histamine load–and why.  Spoiler alert: Although it’s shaping up as the next diet fad, a low histamine diet is not a panacea for quick weight loss, clearer skin, or boundless energy.

But maybe, after listening to the first show, you’re thinking that histamine intolerance could be be an issue for you. In that case, you might want to experiment with some dietary modifications. In the second show, I try to make sense of a lot of conflicting advice about the histamine content of foods.

Speaking of conflicting advice, a listener recovering from diverticulitis is understandably confused by the information he’s gotten on fiber.  Should he be loading up or laying off? My recommendation here.

If you’ve been enjoying my series of Nutrition Cheat Sheets, here’s another one to bookmark:  Sodium in sushi.

Our ReViVer restaurant team was delighted by this write up in the Wall Street Journal and this profile on Fox News. If you’re in New York City, I hope you’ll stop by for a healthy lunch!

Perhaps because he couldn’t make it to New York, Matt Purdy, our intrepid Senior Producer at Maryland Morning (WYPR FM), recently attempted to live for a week on Soylent instead of food. Host Tom Hall and I sample the Soylent and debrief Matt on his experiment.

And finally, one last reminder about the Can It Forward live webcast from the Brooklyn Boroughs Hall Farmer’s Market with Hugh Acheson. Tune in Saturday August 16 at 10am Eastern for canning demos, tips, and to post your questions to the experts.